I was born in Philadelphia, Pennsylvania. I decided to be born during a massive snowstorm. At the time, it seemed like a good idea. I am an only child, which means that I know how to play 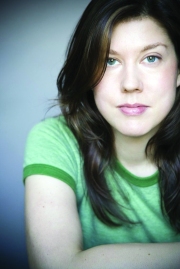 Candyland by myself.I was always one of those reading and writing kids. After a little dalliance with astronomy (I had a glow in the dark star chart) and archaeology (I had a little shovel), I declared my intention to become a writer at the age of eight or nine or so.

Even though I am not Catholic, I attended an all-girl Catholic prep high school. (This is the kind of thing that passes for a joke in my family.) Despite slightly gulag-like conditions, total lack of contact with the male sex, and minor mental scarring, high school was a pretty good experience for me, as I met several of my best friends there. Captivity can breed this kind of warm feeling. However, the experience caused me to develop a lifelong aversion to polyester and knee socks.

I graduated from the University of Delaware, home of the Fighting Blue Hens. I was a writing major, but I spent most of my time working on shows. After college, I became the literary manager of a wonderful (but now defunct) Philadelphia theater company. Soon after that, I moved to New York to study theatrical dramaturgy and writing at Columbia University School of the Arts. As a graduate student, I held at least a dozen different jobs to pay my way through school. These included: working in a haunted house theme restaurant, being a fake employee for a company to make it look

like more people worked there than actually did, and working on a show in Las Vegas that had live tigers and malfunctioning smoke machines in the same enclosed area. I was also an editor. Read more http://www.maureenjohnsonbooks.com